Day 8 - Free Day
Cadiz is surrounded by water on all sides. I have a picture here: 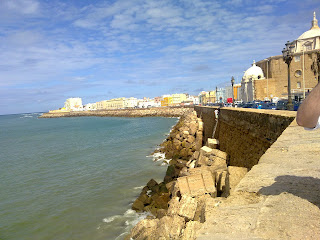 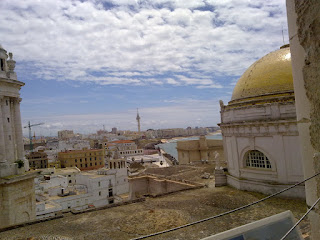 The end of the strip is where the old downtown used to be. It is now mostly a tourist attraction used to take money away from tourists with their extremely expensive meals and items. I went to see some lame cathedral and ate poorly cooked food.
Oh yeah, I bought a totally sweet ds charger. It was sweet because Nintendo didn’t opt to pay the extra 20 cents to include a voltage convertor for their default charger. This one is USB and should be fine wherever compooters are used.
After lunch, we walked back to the hotel (did I mention the hotel itself is pretty sweet, except for the whole see-through bathroom door. Had a little siesta (afternoon nap), and then headed out for dinner. Went to McDonald’s again and this time I went for the value menu again. Spent 2 euros versus the 15 euros for the stupid expensive lunch. Blah.
Walked along the beach and then I mostly went to bed (after hanging out with some cool guys.) 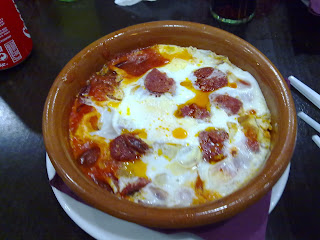 Checked out at 9 am and headed for Seville. The ride only took about an hour and a half. This City is very organic and old. What I mean is that the streets only have enough space for two lanes max. The rest of them only have space for one lane. In addition, the roads are laid out at strange angles (not parallel and perpendicular like ours.) This is the result of having a really old town centre that just grew outwards.
While I still had clean clothes when I got to Cadiz, I was running out of clothing by today. I went to see the Cathedral at Sevilla, which was pretty neat. One of the better ones I’ve seen in Europe. I then bolted back to the hostel to put my laundry into the dry cleaning. 3 euros for each machine, which is way more reasonable than the 3 per item at the Laundromat. Went for a walk for dinner, but ended up eating cheaply at some cheap place. I’m trying to conserve money for now. I don’t really think I like the whole Spanish-seafood stuff in this part of the province. I had this mussel that had disgusting things inside that tasted like grass or some sort of plastic. Not exactly clean water. It was within the mussel, so yeah.
Didn’t go clubbing or partying, but just stayed indoors. Went to bed at 1:30 am. One of the roommates got hella pissed off because she wanted to sleep. I can understand wanting to sleep, but the thing is that she disappeared downstairs for 3 hours ‘waiting’ for people to leave the room and when she got back she was angry it wasn’t over. By that point, we’ve winded down and people were leaving. She decided to ‘get back’ at us by playing Chinese music which was stuck in a loop. I put on my earplug/phones and lol’d to sleep. Fact: If she stayed in the room, people would have left for bed earlier, like at midnight. (the next day’s activity doesn’t start until 10.) Oh yeah, the hostel fits 6 people and she was the only one who didn’t want to do anything.
Day 10 – Los Cruces 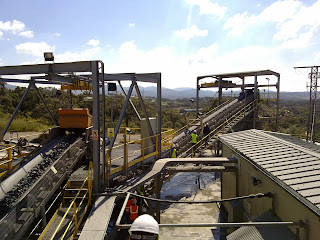 Went to Los Cruces, a place where dreams are born. The deposit at the mine is intensely rich compared to other places and as such are able to afford many luxuries. I mean, just look at their front entrance. They have enough money to make a waterfall moat. They’re also in the process of installing new palm trees. Baller.
We got the usual mine tour. Apparently the clay in the region makes it impossible for vehicles to go when it is wet, so every time it rains, they have to stop operation. They’re still making a boatload of money though. Good for them. They served us lunch and we went back to the City.
I feel like I have to reiterate that alcohol is really cheap. I’m not sure if it is the taxes or what, but on average, I have to say it is about 40% cheaper in Spain.
Another awesome thing about Spain is that all of the prices listed have tax included. That’s right! What you see is what you pay. No more bullshit dumb calculation in the head.
Posted by Lier X Agerate at 10:01 PM