The latest game in the franchise and possibly the last one in the series with Kratos (considering the ending.)
If you have played the previous God of War games, you have pretty much played this one. The gameplay is almost exactly the same. There is still the quick time events for all the major boss fights. You essentially just hit the boss enough times until there's a button on the bosses' head. Hitting the button will lead into an epic quick time event ending in the boss' death.

One of the main criticisms I've had for these games is that if you fail in a sequence during the quick time events, you fail completely. I would actually like to see some sort of branching path in the QTE. ( I mean, if I cut the minotaur's stomach with my blade, and then stab his back, he should still be hurting even though I missed the stab to his eyes.) You have to restart the entire sequence again. This isn't a big deal (because I rarely miss), but I think it can be improved.

God of War was never really known for the depth of its story. All three games are about a really mad bald character who is trying to kill a bad guy and will stop at nothing at achieving that goal. Though the story formula is about the same, this version lacked the drive for the player to complete the task. In God of War I, we are shown the reason why Kratos wanted to kill Ares. Ares had indirectly caused Kratos to murder his own family. In God of War 2, Zeus tricked and killed Kratos. It makes perfect sense that Kratos wanted to kill Zeus. In God of War 3, Kratos is still angry from the second game. We don't really see Zeus do anything to Kratos. I didn't really have the same

The first game introduced us to the fantastic world. It ended with Kratos killing Ares and becoming the god of war. The second brought in the concept of the Fates, which was a major part of the whole Greek Mythology. Kratos used the looms of fate to change to allow the Titans to come back into the 'present time', launching an offensive against mount olympus. The third game doesn't really introduce any concepts we haven't seen before. We get to see the Labyrinth, which was pretty well designed, but it doesn't have the impact of the things from the other games. The end of the game was completely lackluster. Kratos gets his vengeance, and then nothing. We get no satisfying conclusion. It felt empty, just like Kratos after his revenge.

I love that when each god dies, their associated 'domain' gets messed up. When Poseidon died, the ocean flooded to the mountain. When Helios died, the sun went away. It was great to see the world transform with each god that dies.  I expected Kratos to destroy the entire Olympian god structure at the end of the game. There would be no titans or gods left to control the elements, and there would be no need anymore. The world would be able to exist without any gods. Essentially, I wanted the God of War world to transform into one like our own.

After the climactic battle of the game, there was a long cutscene between the ghost of Athena and Kratos. Athena wanted Kratos to give her whatever was inside Pandora's Box. Kratos insists that the box was already empty when he got there. It turns out that when all the evils of the box was released in the end of GoW1, they flew into all of the gods of olympia, turning them into paranoid assholes. Hope (which was the power to destroy the gods) got inside Kratos, but he couldn't use it because of all his anger. At the end, Kratos worked out his anger issues by forgiving himself and was able to kill Zeus.

The game was pretty good up to this point, but then they had to add in this hope bullshit into the story. There was a minute of dialogue from Athena explaining that the power of HOPE was inside Kratos all along! Hope beats everything because hope is powerful!

This ending felt like a non ending. Instead of giving Athena the power, Kratos ends his own life and 'hope' was dispersed into the world. Kratos lies down on the ground, bleeding to death. After the credits, there's a trail of blood leading to a cliff. The end.

Summary: I like this game. It just didn't live up to the hype. :(
Could have used a bigger character transformation for Kratos since this is his last game.

"The Epic Conclusion to the Tiberium Saga"


C&C4 was announced with a shift from base-building and resource gathering to a mobile 'supply-based' combat. You are given a set amount of supplies (50/60/80) which you're able to have right from the start. Killing enemies will eventually give you tech points which allows you to research unit upgrades or unlock a higher tech tree.  Because of the limit of possible units, the game becomes more focused on getting the correct combination of units against theirs. This is both a positive and a negative. If your army is destroyed, you can quickly rebuild it all.

There's also three different roles you can choose during the game. Offensive, Defensive, and Support. They each have unique units, buildings, and abilities suited to their respective roles.
In addition, there's a new 'player experience' system. During gameplay, certain actions such as killing different enemies or completing mission objectives, will award experience points. As your experience gets higher, more units will become available to you. One playthrough of the campaign got me to level 13 out of 20, so I wasn't able to use the best units on the last mission.

In multiplayer, all the maps are point-based. The first to reach a certain number wins. These points can be acquired by capturing certain buildings, or killing units in the game. When your main 'crawler' (or MCV mark 7) dies, you can request a new one.

Overall, I feel that some of the changes in the game play is necessary. How many iterations of the same game can we really go through? I'm just not keen on losing the resource system because it made the game feel much simpler.  The game as is works, but I think I would have liked another rehash of the same RTS from the past decade.
---
Command and Conquer was never really about the gameplay to me. I am a big fan of science fiction, and the idea of an alien poisonous unstoppable glowing green mineral/plant fascinated me right from the start. With the rich lore of the universe (with Kane apparently being an immortal prophet) and the semi-serious FMV, the story was what really mattered to me. That's why C&C4 is so disappointing to me.

It was quite obvious to me that Command and Conquer 4 lacked the budget or time of the previous versions.  While the lines in C&C3 were about the same quality, the actors were able to transcend through the script and really deliver something that's mediocre. C&C3 had an awesome cast with Sawyer from Lost and Michael Ironside. The acting in this version is one of the worst in the series. The entire storyline felt flat and uninspired. There was never really any clear motivations for why people are fighting at all.

In the intro to the game, Kane decide to call a truce with the GDI forces after seeing how Tiberium has contaminated most of the Earth. He meets up with GDI leaders and offers them the Tacitus, which is an alien orb containing vital information which can save the world. 15 years later, the alliance has built several Tiberium Control Network towers which promise to keep the infestation at bay, giving humanity true safe zones while allowing them to harvest the mineral rich resources of tiberium. Not every single Nod soldier likes the idea. There's a splinter group which seek to destroy all of the towers, citing that Kane has betrayed the ideals of Nod.

In this game, you play as a commander who chooses to side with GDI or Nod in the fourth mission. Apparently, you are one of five people with a newly installed occular implant that is vital to the activation of these TCN. Throughout the game, the people with these implants are killed, leaving you to be the sole survivor. Apparently in addition to controlling the tiberium infestation, the TCN towers are also key to Kane's ascension. They beam a magical frequency to the surviving Scrin tower in the game, which ultimately opens a portal to an unknown place.

If you side with the GDI, it turns out that your commander tricked you by killing your wife and blaming Kane. You spend the rest of the campaign crying about your dead wife and exacting your vengeance on Kane.Turns out, your commander was butthurt due to the lost of her family in the war. She wants Kane dead and can't see reason. Nothing in the missions really matter, because in the end, you have to stop Kane from activating the Scrin tower. Inside, Kane reveals that your boss is a lying sack of shit. He begs you to open the portal (PLOT CONTRIVANCE OF THE IMPLANT ARGH) and you do. Kane hops into the purple portal. Your boss is probably killed by Kane.

If you sided with Nod, you spend your time protecting the TCN towers and fighting off the splinter Nod faction. Blah Blah Blah. You end up in the same place, but this time you die so you can't hop inside the magical portal.

In the aftermath, the TCN towers activate and tiberium is gone from surrounding areas. Kane's loyal followers who were at the Scrin tower have disappeared,  presumably they 'ascended' with him. Yay. The story is over!

And then someone in the script department decided to add in a line which ruined the climax. The scene is set on the street interviewing a random stranger. "Kane, gone? Yeah right!"
Queue the credits.

Summary: Nothing is explained. Kane's plan as shown in the various Nod campaigns don't make sense. The only confirmed thing is that Kane has lived for thousands of years and has worked all this time for his ascension. How does converting the world to a Tiberium Red Zone in C&C2 make sense? It doesn't. Why wouldn't Kane build a remote to activate the portal? Apparently the only way to open the towers is to implant new eyes into people. What happened to the Scrin?

The game infuriates me because it could have been so much better.

Say hello to my little friends 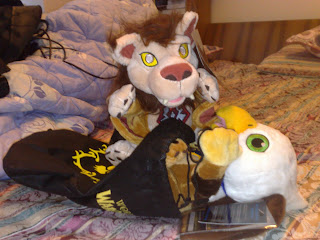 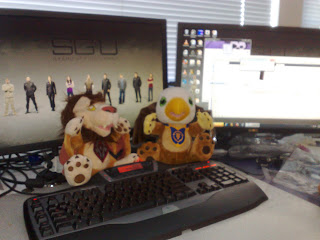 The two creatures were bounded and stuffed into black bags. I freed one who proceeded to free the other!
Posted by Lier X Agerate at 4:59 PM No comments: