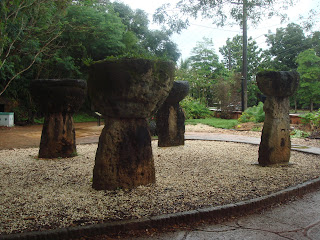 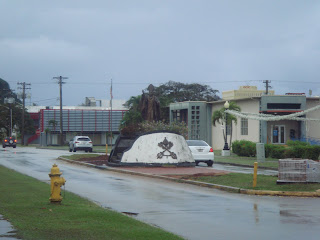 Rotating Pope - Doesn't rotate anymore due to failure of mechanizm 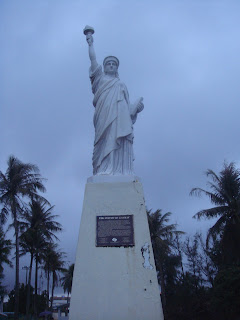 The first official greeting I received from Guam was during the post-flight video( which looked like it must have been recorded over 20 years ago). In the video, the narrator mentions that one of the biggest attraction is the Rotating Pope Statue, built in honour of the Pope's arrival back in ~1985. The other big attraction is the aquarium. Yep.

I have to confess, I knew nothing about what or where Guam is before I came here. Here's a short lesson. It is an Island-Nation/Territory of the USA in the Pacific Ocean. It is about three and a half hours of travel by plane from Japan and Taiwan. Plastered on the walls here are posters proclaiming that "Guam: Where the Sun first Rises in the USA". Neat.
So, Spain owned the island for about a billion years. The Americans came in the 1800's and won it. During the second world war, the Japanese took over for a while. It went back to the United States after the war. Cool man.

Guam is a hugely popular tourist place for the Japanese people. Thus, I've been mistaken for being Japanese a couple of times. When they try to speak with me, I just say Domo Arigato and ohayo gozaimasu, which doesn't make sense for most of the conversations. Neato.

Anyway, I've been here a couple of days. After the wedding tonight, I'll be hopping on a plane back to the Hong Kong Land. The place is pretty nice. The first couple had been marred by the occasional rain. Today is gorgeous though, with the sun and blue skies and stuff.
Woo!